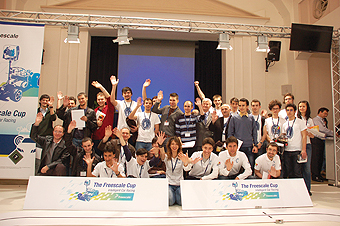 The Freescale Cup, sponsored by Freescale Semiconductor, is a global competition where student teams build, program and race an intelligent model car around a track. The fastest car to complete the track without going of the track wins the race. This is the first season of the Freescale Cup in the Europe-Middle East-Africa (EMEA) region.
The 2012 Finals were a great success with 33 participating teams racing their cars on the Freescale Cup track in Prague.
The competition was organized in two rounds. During the qualification rounds, the students demonstrated the model cars they built during the year and the innovative solutions they 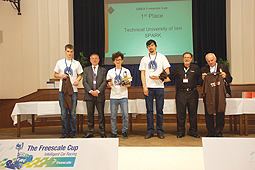 developed. The 112 sq/m racetrack consisted of speed bumps, an intersection, a hill and zigzag curves. Each car had to run its best lap time over two consecutive laps to make it to the final round.
The 15 best performing teams were selected for a final round on the second day of the competition. The “SPARK” team, from the Technical University of Iaşi (Romania), won the competition, finishing just ahead of Team “3.14” from Slovak University of Technology and the team from Politechnika Wroclawska.

“The creativity demonstrated by all the teams to cope with the racetrack conditions, as well as the expertise they demonstrated in using Freescale’s leading edge silicon solutions, was amazing,” said Flavio Stiffan, program manager for the Freescale Cup Challenge in EMEA. “We hope they improved their technical and teamwork skills by participating in the program and we are eager to see them compete in the Grand Final with the winners of the other regions.” 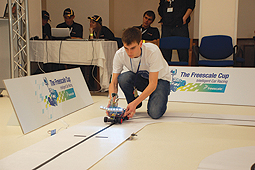 University of Technology. In addition, the Best Introduction team video award was won by the Faculty of Computer Science of University Politehnica of Bucharest, while the Best Uniform special award went to the “PERSEUS” team from Brno University of Technology.
The winning team will attend the Freescale Technology Forum (FTF) in San Antonio, TX June 18 – 21 to race their vehicle against finalists from other regions.
In addition to participating in the competition, students got the opportunity to share their work and network with their peers and faculty as well as Freescale engineers, industry partners and customers. 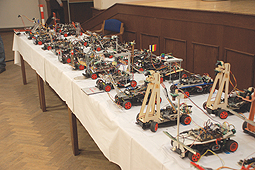 the entry kit;
• student created motor control hardware and software to propel and steer their intelligent car;
• students working with a camera to navigate the car through the race course by following the guide line.
The standard intelligent car components are the model car kit, servo, electric motors, a battery with a charger and a quick start guide. Below is a list of the specific elements by function:
• chassis – 1/18 scale model;
• propulsion – 7.2V DC motors (one for each rear wheel);
• steering – servo motor;
• control system – Freescale Qorriva MPC5604B automotive microcontroller;
• motor control – Freescale analog board;
• a MC33931 H-Bridge;
• guidance – CMOS camera.