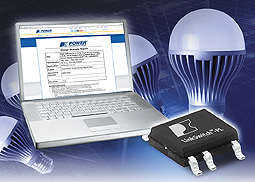 Power Integrations, maker of the world’s most efficient, longest-lasting off-line LED driver ICs, announced an LED-driver refe­rence design for high-power LED bulb replacement. The driver can deliver the power required for a 100 W incandescent bulb replacement in an A19 form factor – an industry first. DER-322 describes a non-isolated, 93% efficient, high-power-factor (PF) LED driver designed to drive a nominal LED string voltage of 78V at 230mA from an input voltage range of 195VAC to 265VAC (47Hz – 63Hz). The LED driver utilizes the very low-profile LNK460VG from the LinkSwitch™-PL family of ICs from Power Integrations.
DER-322 fits neatly inside the A19 form factor, is EN61000-3-2 C (D) compliant and easily passes THD limits. With a PF above 0.95, it suits commercial as well as consumer applications. With PFC and CC conversion combined into a single switching stage, the design has a very low component count, which enables miniaturization, lowers cost and increases reliability. It also eliminates short-lived electrolytic input bulk capacitors.
Suitable for an A19 incandescent bulb replacement-driver but also reconfigurable as a T8 tube replacement driver, DER-322 is of interest to designers of both high-end LED lighting and those working on cost optimization of bulbs for retail sale. The reference design may be easily modified to support TRIAC dimming.