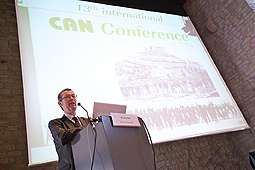 Since many years, there is some rumor on an improved CAN protocol. At the 13th iCC organized by the CiA nonprofit association, Bosch has introduced the CAN-FD (flexible data-rate) protocol. It is backwards compatible to the CAN data link layer protocol as standardized in ISO 11898-1. It allows higher transmission speeds in a part of the data frame: Bosch and Vector demonstrated a 15Mbit/s CAN-FD network prototype using off-the-shelf transceiver chips compliant with ISO 11898-2. Besides the increase of throughput, the introduced protocol supports larger payloads. 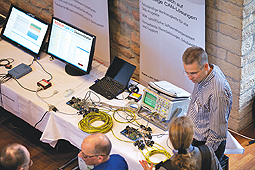 Up to 64 byte are transmitted in a single data-frame. This avoids in many cases a segmentation of data. Several carmakers (e.g. General Motors and Renault) were very interested in the new protocol. For the 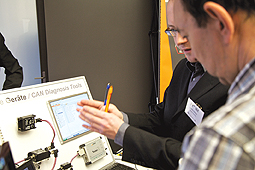 CAN experts from all over the world discussed many topics in very details, e.g. about failure detection possibilities with sophisticated tools

automotive industry it is very important that the CAN cabling and the other physical layer components including transceiver chips can be reused. Also other industries are interested in the CAN-FD protocol. One paper was focused on the topic, how to map the CANopen application layer to CAN-FD. Most important is the prolongation of PDOs (process data objects). PDOs with up to 64 byte payload will allow to transmit different 64-bit commands in one message, which overcomes today’s data consistency problems. “In particular, the drives and motion control industry will appreciate this feature,” said Heinz-Juergen Oertel, CiA’s former technical director.
The iCC took place in Germany and was participated by more than 130 experts from all over the world, including India and Malaysia. The speakers covered several topics such as Linux software driver, CAN applications, and usage of CAN-related tools. At the conference some silicon vendors launched their CAN transceivers supporting selective wake-up functionality as standardized in ISO 11898-6. These chips will enable partial networking; this means the user is able to switch single devices on and off, in order to reduce energy consumption.

CAN in Automation (CiA)
www.can-cia.org