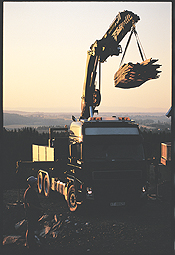 The CAN in Automation (CiA) international users’ and manufacturers’ group has released version 3.0 of the CAN truck gateway specification. Gateways compliant to this specification link CAN in-vehicle networks to CANopen-based body applications. Truck bodies are, for example, cranes, aerial working platforms, concrete mixers, or road-cleaning equipment. Objective of the standardized gateway interface is that a body controller can be installed on different truck brands without much integration effort. Iveco already provides many of its trucks with CiA 413 compatible gateways.
The CANopen profile specification is widely based on the ISO 11992 series. In addition, it specifies a mapping of generic J1939 messages to the CANopen dictionary. Part 8 of CiA 413 describes the framework to use the in-vehicle display by the body controller. This avoids the installation of a separate body-specific display. CiA has released also the CiA 850 recommended practice, which specifies the gateway implementation for truck-mounted cranes. The leading European crane manufacturers have developed it.

CAN in Automation GmbH
www.can-cia.org