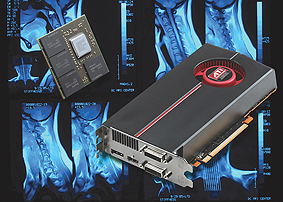 The level of performance called for in medical imaging and simulation is often so high that even the latest multicore processors find it difficult to keep up. An efficient alternative to the supercomputers otherwise needed to meet the kind of requirements presented by medical diagnostics and therapy can be found in today’s extremely high-performing general purpose graphics processing unit (GPGPU) technology and tools with which the massive parallel computing power of modern graphics cards is easily channeled. AMD now makes this technology available long-term for the embedded market in the form of the ATI Radeon™ HD 5770 and the new AMD Radeon E6760 GPGPU.

The thirst for more performance has been driving processor developments from one extreme to the next — faster clocking, more bit width and ever smaller fabrication volumes are meant to further optimize the performance rewards. The next step in the x86 market was the introduction of multicore technology, consuming about the same power but multiplying performance. Nevertheless, even the new multicore processors are often no match for applications in which you want to process large quantities of data as fast as possible. Because in imaging diagnostics such as MRT and CT, for in-stance, using solutions set up on multicore technology may still mean having to wait several minutes, if not hours, until the final image data appear, depending on the volume of data involved and the complexity of processing.
This is contrary to the need to process medical image data as speedily as possible for purposes of diagnosis and treatment, yet still visualize them with extremely high resolution — in applications enabling diagnosis of breast cancer, for instance, where you want fast readout of images in high detail. Other applications that make extremely high performance demands on the supporting hardware include rebuilding images for high-speed 3D X-ray computer tomography. This calls for conversion of X-ray projection data into non-overlapping, three-dimensional slices of an object of interest using image reconstruction algorithms, which needs to be done as fast as possible, of course. Simulation is one of the most ambitious medical uses for CPUs besides diagnostic applications — take virtual microscopy, used in pharmaceutical research, for example: uniting chemical, physical and mathematical formulae in simulation software, this employs complex algorithms to simulate molecules and the way in which they react with one another.
What is common to all these applications is that performance demands on the processor cores are extremely high, and even the latest multicores seldom fully live up to them. Of course it is possible to combine a number of multicore processors in a single high-performance cluster for such compute-intensive and time-critical applications, but the cost of purchasing and operating that kind of super-computer plus its infrastructure is huge.

GPU technology is developing parallel
But parallel to CPU technology there has also been fast development of graphics processing unit (GPU) technology, driven in particular by the consumer market. More frames per second, higher resolution and uniform programming interfaces have created a broad basis for use of this technology in data processing too. Because getting down to the data level, there is not really much difference between computing and displaying virtual worlds in games and visualization of raw data from a variety of sources, such as an ultrasound or coronary examination. GPUs are sometimes even better able to handle parallel and data-intensive tasks, for instance. Being restricted to specific problems without excessive management enables them to be designed so that most of the transistors are devoted to computing operations and not needed for control and caching, as is the case with CPUs. Computer scientists at universities led the way in using the huge parallel computing power of modern graphics cards. Such a degree of parallelism made the algorithms extremely complex, though, so this initially only really appealed to idealists and specialists.
With the introduction of IDEs such as the AMD Accelerated Parallel Processing SDK and programming environments like OpenCL™ as an accompaniment to OpenGL, all developers are now able to tap the performance of modern graphics processors. Diagnostic speed can be multiplied simply by the parallel computing power of modern graphics units. Combined with high-resolution and loss-free imaging, this high performance can produce incredible visualization results. Such GPGPU-enabled high-performance systems have cost benefits as well. And not just because it is less expensive to set up on a standard embedded platform with powerful graphics units as coprocessors instead of a cost-intensive supercomputer. A system like this requires less floor space and cooling infrastructure, making it highly cost-effective overall. Nevertheless, graphics card technology has had one downside, until now, that can sometimes detract from all the advantages of using GPUs in high-performance embedded computing (HPEC) applications — it has a short life. The problem facing producers of embedded systems was, therefore, the lack of high-end embedded graphics with
long-term availability.

High-end graphics for the embedded market with long-term availability
AMD offers a high-end PCI Express® capable graphics card for the embedded market with long-term availability1— the new ATI Radeon™ HD 5770 PCI Express capable graphics card as well as the new AMD Radeon E67602 embedded discrete GPU. This novel development helps provide medical apparatus OEMs the sustained design security they want for their graphics hardware too. In addition to long-term availability, OEMs can benefit from simple integration of the graphics processing unit: A PCI Express capable x16 (PEG) graphics card can easily be used in a variety of embedded platforms, from a standard server board to a high-end PICMG 1.3 backplane configuration. The new AMD Radeon E6760 embedded discrete GPU is also available in a compact MXM form factor according to the MXM 3.0 specification. But not only graphics-intensive applications can benefit from this extremely high processing capability, because the stream processors of the graphics unit can take a huge workload off the multicore CPUs in the parallel processing of different data streams. Combining these processor units in shader units enables vector processing in addition to scalar operations. This potential is easily accessed through standard programming platforms and APIs such as OpenCL™ or DirectCompute, thus simplifying and speeding up the development of an application. Turning to total cost of ownership, this type of GPGPU solution is designed to be cost efficient because systems enhanced by modular GPUs do not require multicore processors distributed over a number of server boards to produce measurable savings. Exchanging a GPU is also less complicated than replacing an entire board, be it for maintenance or to upgrade performance. Furthermore a GPU can be easily replaced long-term by a compatible and more powerful model without significantly altering the overall configuration of a system.
There are consequently numerous reasons in favor of high-end graphics hardware in medical embed-ded systems. The long-term availability of AMD solutions such as the ATI Radeon HD 5770 PCI Ex-press capable graphics card or the new AMD Radeon E6760 GPU does away with the short-term availability obstacle. AMD has launched more embedded graphics products in 2011, such as the integrated advanced processing unit (APU) solutions enabled by AMDs Fusion technology, which unites the CPU and GPU for energy efficiency on a single chip and ushers in the next generation of ultra mobile and powerful medical applications. With the widespread introduction of GPGPU technology, the hope is that it will increasingly become mainstream, cutting down the time to develop new applications. 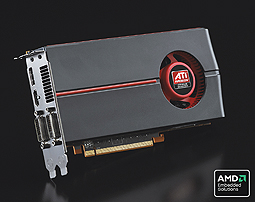 graphics for embedded systems. With a GPU clock of 850 MHz and 1 GB of GDDR5 RAM with 1200 MHz, this PCI Express capable card helps accelerate Open GL 3.2 and DirectX®11 applications with its AMD Stream technology plus it supports OpenCL™ 1.0 and DirectCompute 11. For really high-end 3D rendering applications — in medical imaging and simulation, for example — as many as four graphics cards can be coupled with the help of AMD CrossFireX™ technology3. Two displays can be driven independently on the two dual-link DVI-i interfaces with a resolution of up to 2560 x 1600 pixels. Displays can also be tied by CRT, HDMI and DisplayPort. AMD Eyefinity multi-display technology4 allows simultaneous operation of three monitors with different resolutions, frame rates, color models and video overlays as well as combining several monitors to create a single large display. Fitted with the AMD unified video decoder (UVD 2.0), the graphics card has a sustained impact in taking load off the CPU during reproduction of H.264, MPEG-2 and VC-1 full-HD videos, showing the way to energy-efficient and thermally attractive system designs.

3) ATI CrossFireX™ ready motherboard required.
4) AMD Eyefinity technology can support up to 6 displays using a single enabled ATI Radeon™ graphics card with Windows Vista® or Windows® 7 operating systems – the number of displays may vary by board design and you should confirm exact specifications with the applicable manufacturer before purchase. AMD Eyefinity technology works with games that support non-standard aspect ratios, which is required for panning across multiple displays. To enable more than two displays, additional panels with native DisplayPort™ connectors, and/or certified DisplayPort™ adapters to convert your monitor’s native input to your cards DisplayPort™ or Mini-DisplayPort™ connector(s), are required. SLS (“Single Large Surface”) functionality requires an identical display resolution on all configured displays.

New Embedded GPU Offering Support for OpenCL™ and Six Independent Displays
The AMD Radeon™ E6760 GPU is the first of its kind to offer embedded system designers the combination of OpenCL™ support along with support for six independent displays. An advanced 3D 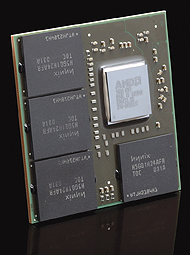 MXM V3.0: The modular solution for embedded graphics
Contrary to the case with PEG cards, MMX modules are mounted parallel to the carrier board, so 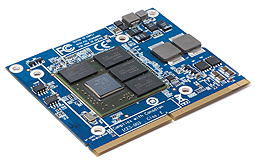 that the height of the embedded design is effectively flat. MXM basically builds on the same advantages that have led to the success of computer on modules:
They offer a standardized footprint, a standard pinout and assembly concept and are also suitable as add-on components, in particular for custom designs. With its product range both in the PEG and MXM form factors, AMD covers the complete requirements spectrum for embedded modules and board-level segments. This ranges from compact, mobile devices right up to rack-mount servers, while meeting the ultimate requirement of long-term availability.

To secure the advantages in the offing, it is well worth thinking today about implementing the technology.