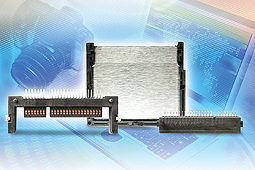 ITT Interconnect Solutions has announced the launch of a new line of ultrasonically welded two-piece cover sets and 24-pin surface mount connectors designed to meet the latest CFast standards issued by the Compact Flash Association. Developed to accommodate consumer demand for faster storage speeds in such applications as digital cameras, handheld portable devices, computers and medical instruments, this latest CFast standard is the combination of Compact Flash (CF) and ATA Serial Transport (AST) which offers both flexibility and speed. ITT ICS developed its new CFast card kits and connectors to provide both the parallel (PATA) and serial (SATA) interfaces demanded by the new CFA standard and conform to both Type I and Type II of the new specifications. The CFast cover sets consist of a plastic frame moulded around a stainless steel cover and oriented in position with guide-posts, which simplifies assembly. Once assembled, the covers are ultrasonically welded together with a continuous weld joint around the perimeter of the card and are the most secure, tamper-proof, rigid and robust card kits available on the market today. ITT ICS CFast card kits can be customised to meet any CFast product application.