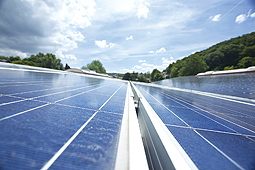 Until now, the photovoltaic market has recorded excellent growth in the high double figures. But international competition is becoming tougher, forcing manufacturers to come up with innovations and adjust the prices of system components. As an entirely independent adviser, the distributor offers the developers sound support in the selection and design-in of technologically and commercially suitable components. Not only does this require comprehensive knowledge of the components but also of the applications themselves and the market in general. Rutronik has united this expertise in its Renewable Energy Vertical Market Team, within which product engineers and field application engineers from the fields of active, passive and electromechanical engineering work closely with wireless and display specialists. They deal also extensively with PV inverters. One of the key components which may have a significant impact on the efficiency of these inverters is the microcontroller.

Circuit variations and block diagram
Figure 1shows the function blocks of a typical solar inverter with a photovoltaic (PV) module string: A DC/DC converter with Maximum Power Point Tracking (MPPT) is followed by a DC/AC mains inverter. Depending on the mains connection performance, the inverter is either designed as single-phase with an H-bridge or three-phase with a 6-pulse bridge. Relatively new on the scene are microinverters – small solar inverters mounted directly on each PV module. Due to the expected volumes, microinverters are especially price-sensitive. The installation size also plays a more important role than with conventional string solar inverters.

The microcontroller must provide the following functions:
• Measurement and analogue/digital conversion of state variables such as temperatures, currents and voltages.
• Maximum Power Point Tracking (MPPT). The microcontroller multiplies current and voltage for electrical power.
• Protective functions for faults such as excess temperature, overcurrent etc. Rapid disconnection mechanisms are required here to protect the device and the operator.
• Phase-accurate network synchronisation for which the current network angle must be determined.
• Various control loops depending on mathematic model. This involves the execution of similar calculations to those also used for the field-oriented control of AC drives. In particular, these include trigonometric processing operations with which voltage and current vectors in various partially rotating coordinate systems are transformed back and forth.
• Generation of the control signals for the power semiconductor so that the degree of efficiency is as high as possible and fewer harmonics are generated. Appropriate PWM (pulse-width modulation) timers or two-position controllers with hysteresis are required for this
• User interfaces and communication. 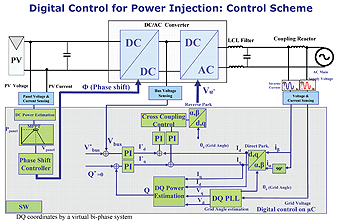 Figure 1: Block diagram of the reference design of a solar inverter from STMicroelectronics: The power unit comprises a controllable DC/DC converter with a downstream mains inverter. Shown in green are the software function blocks for Maximum Power Point Tracing (MPPT) as well as active and reactive power control in the vector model.

With microinverters, the power cables in particular provide a physical layer, thus Powerline Communication (PLC).
The requirements are very similar to those for the control of electrical drives. The motor which the solar inverter drives is the synchronous generator in the energy company. All major manufacturers currently supply microcontrollers which are suitable for use in inverters. As they are based on various technologies, they have different strengths and weaknesses.

A comparison of current microcontrollers
The RX62T from Renesas is a member of the 32-bit RX Renesas Extreme Microcontroller motor controller range, which is manufactured in 90 nm technology. An important core component from Renesas is its own MONOS Flash technology, which allows code execution at clock frequencies of up to 100 MHz without wait states. When combined with an RX microcontroller, this produces a maximum processing performance of 165 DMIPS. A part of the ROM is also specified as data flash with up to 30,000 erase cycles. This makes it possible to economise on an external EEPROM. The newly developed CPU core is very code-effective, achieving a processing power of 1.65 DMIPS/MHz. The integrated floating point unit (FPU) offers single precision as per IEEE-754. 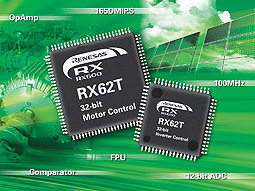 Two MAC commands and a barrel shifter are also available for 32-bit integer arithmetic for digital signal processing. These mathematical capabilities make the module ideally suited for processing-intensive algorithms such as those executed in solar inverters.
With respect to peripherals, Renesas also had plentiful resources on which to draw for the RX62T: The analogue input stage with the two independent ADCs, each with 12-bit resolution, is uncompromisingly designed for use in inverters. The shortest conversion time is just 1 µs. Each of the six analogue inputs has an operational amplifier with programmable gain (PGA) and a separate sampling/hold element. For fast shutdown of the PWM signals, the outputs of the PGAs are also placed on six window comparators so that protective functions are also active without software influence and their latency. This makes the RX62T ideal for integration: As it already has many integrated analogue components, there is a significant reduction in the need for external components for signal processing in the solar inverter. An MTU3 (Motor Timer Unit) and GPT (General Purpose Timer) are available for controlling the power semiconductor.
The timer units are part of the SH range and also work with input clock frequencies up to 100 MHz.

The STM32 from STMicroelectronics was very well received on the market – and quite rightly so, because it combines the popular ARM Cortex-M3™ processor with state-of-the-art peripherals. It also offers an excellent price/performance ratio. STMicroelectronics has already documented the suitability for solar inverters with a reference design for a 3 kW device, where an STM32 processes all algorithms and generates all control signals both for ZVT push-pull converters with phase offset modulated synchronous rectification and for the mains inverter.
Microchip’s dsPIC33 is a 16-bit digital signal controller, hence an MCU with DSP capabilities, or a DSP with the excellent characteristics of a microcontroller. Microchip has launched its 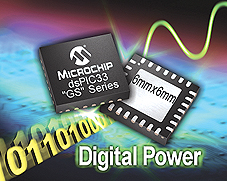 ADCs. Multiplier and division instructions are available for fixed point arithmetic. Naturally, a dsPIC can also handle the multiplication and accumulation in one cycle. For switching power supply applications, such as the DC/DC converter or mains inverter in a solar inverter, the dsPIC33FJxxGS are first choice because they have a power supply PWM module that can be synchronised with frequencies up to 120 MHz. The module offers up to nine channels and is suitable for the control of full or half bridges, as they are also required, for example, for phase-shifted PWMs with zero voltage transition (ZVT). Microchip offers a few reference designs based on the GS range, from which modules for a solar inverter can be taken. The “Digital Pure Sine Wave UPS Reference Design” is available for single-phase mains inverters and the “Digital Power AC/DC Reference Design” for step-up and step-down converters as well as ZVT push-pull converters with phase offset modulated synchronous rectification. 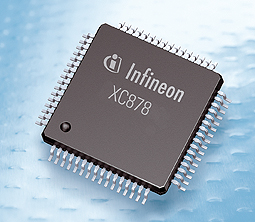 Infineon is heading in a completely different direction with the 8-bit microcontrollers in its XC800 series: A simple CPU core (8051) is surrounded by powerful peripherals which reduce its load. For example, the XC878 was specially designed for inverter applications. The CORDIC (Coordinate Rotation Digital Computer) executes the important trigonometric functions for the Park transformation of coordinates. In parallel with this, the controller also contains a multiplication and division unit (MDU).
Together with the CAPCOM6 timer structure for PWM generation, this gives rise to a powerful ensemble in which the CPU supplies the peripherals with data and retrieves the results just a few pulses later.
In terms of integration, processing power and price/performance ratio, all the microcontrollers presented are recommended for use in solar inverters. The RX is the newest with the highest integration of analogue components. The STM32 offers the widest range of housings and memory. The dsPIC is predestined for rapid 16-bit arithmetic. The XC878 ultimately benefits from expertise in the control of power electronics, which Infineon has incorporated into the peripherals.