Exponential growth in the use of mobile data worldwide has posed significant challenges to wireless operators. Fortunately, wireless technology has continued to evolve, and Long term evolution (Lte) has become the worldwide standard of choice to meet these challenges. the top 25 worldwide wireless operators have chosen to deploy Lte, which promises better use of the operator’s spectrum by improving spectral efficiency; this means more bits per hertz than previous technologies. supporting a successful Lte transition requires a number of innovations in base station soc design. 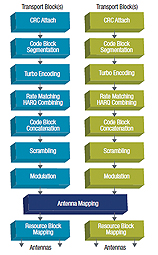 TI’s multicore SoC architecture, called KeyStone, is designed to optimize WCDMA and LTE performance while reducing base station cost and power. For wireless base station applications, an essential part of KeyStone is the implementation of configurable coprocessors for the physical layer (PHY) or Layer 1 of the wireless standards. We’ll talk more about Keystone and TI’s TMS320TCI6618 solution shortly, but first let’s review LTE with particular focus on its PHY. LTE is the latest Third Generation Partnership Project mobile standard. LTE realizes major technology advances over 3G mobile technologies and offers peak downlink rates of at least 100 Mbps and peak uplink rates of at least 50 Mbps for the 20-MHz spectrum. LTE supports flexible channel bandwidths (1.4 – 20 MHz) as well as frequency-division duplexing (FDD) and time-division duplexing (TDD) to allow flexible deployment around spectrum ownership.
The foundation of the LTE communication protocol stack is the physical layer, sometimes referred to as Layer 1. The PHY layer is the basis of solid base station-tomobile device connectivity; without great wireless connectivity, calls drop, downloads fail, and videos stall. The PHY interfaces with Layer 2 (the media access control [MAC] layer) and Layer 3 (the radio resource control [RRC] layer) and offers data transport services to higher layers. PHY handles channel coding, PHY hybrid automatic repeat request (HARQ) processing, modulation, multi-antenna processing, and mapping of the signal to the appropriate physical time-frequency resources. LTE downlink PHY processing accepts data and control streams from the MAC layer in the form of transport blocks and begins processing by calculating the cyclic redundancy check (CRC) and attaching it to the transport block. If the transport block size is larger than the maximum allowable code block size of 6,144 bits, code block segmentation is performed. A new CRC is calculated and attached to each code block before channel encoding. Figure 1 illustrates the major functional blocks in the LTE downlink.
Turbo encoding provides a high-performance forward-error-correction scheme for reliable transmission; rate matching performs puncturing or repetition to match the rate of the available physical channel resource; and HARQ provides a robust retransmission scheme when the user fails to receive the correct data. Bit scrambling is performed after code-block concatenation to reduce the length of strings of 0s or 1s in a transmitted signal to avoid synchronization issues at the receiver before modulation.Various modulation schemes (quadrature phase shift keying [QPSK], 16 QAM [quadrature amplitude modulation], or 64QAM) are used for LTE layer mapping, and pre-coding supports multi-antenna transmission. Finally, the resource elements of orthogonal frequency-division multiplexing (OFDM) symbols are mapped to each antenna port for air transmission. 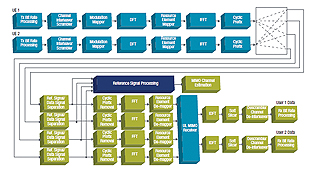 TCI6618 – the LTE enabler
The TCI6618 SoC is a member of TI’s TMS320C66× DSP multicore generation. Based on TI’s new KeyStone multicore architecture, it is designed for high performance wireless infrastructure applications and provides a perfect fit for LTE design challenges. Figure 3 illustrates the features and processing elements of the device. TI’s KeyStone SoC architecture provides highest throughput and future-proof architecture for LTE and its continuous technology evolution. Its multicore SoC architecture–the TCI6618 has four 1.2-GHz C66x cores that support both fixed- and floating-point arithmetic operations builds upon TI’s field-proven multicore DSP platforms and includes an innovative new floating-point architecture and coprocessors for 4G systems. Adding to the computational improvements are innovations to the backplanes and internal data movement, which are critical to achieving full performance from a high speed 4G SoC. 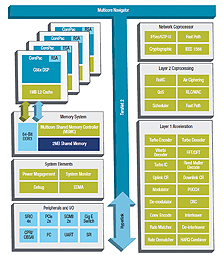 The article has been provided by Farnell in cooperation with Texas Instruments.
For more information visit the page: www.element14.com
All products are available at www.farnell.com