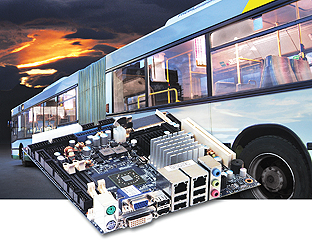 Digital signage in buses is becoming more popular among advertisers and passengers alike. For operators and advertising clients, it means dynamic content — easily changed and precisely aimed at their target groups.
The passengers themselves are presented with a wide variety of content plus interactive elements that provide entertainment while traveling. GEM Interactive has installed a mobile digital signage network with more than 450 displays in 128 buses in Slovenia’s capital Ljubljana. The digital signage specialist developed its solution using a customized box PC from local provider Tipteh that contains an AMD-enabled embedded motherboard from Kontron. Together, these elements deliver the graphics performance, long-term availability, and robustness that such digital signage solutions require.

Digital signage is a growing market
Digital signage is booming. Double-digit growth rates in 2010 are evidence of a trend that has continued into 2011. Joining the company of online media, outdoor, or “out-of-home” (OOH), advertising has become a major seller adding new impetus to the advertising market. What makes digital OOH advertising so attractive is its ability to reach the public when they are most ready to absorb an advertiser’s message. Passengers using public transportation for travel to and from work are a captive audience when waiting for a flight or a train. The same holds true when they are taking a Sunday stroll downtown. Furthermore, digital OOH (“DOOH”) is highly dynamic, quite unlike static billboard advertising. 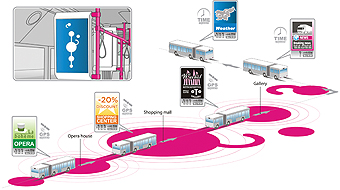 The content is flexible — it can be changed at any time — and its moving images and changing content draw grab more attention than static outdoor billboard advertising.

New possibilities of interaction
The dynamic factor of digital signage solutions is enhanced even more by new technology. Digital signage is moving from pure information presentation to intelligent interaction with its surroundings and potential customers. For example, digital signage displays within public transportation environments can determine a person’s or vehicle’s position or location through the use if integrated GPS or mobile radio features and as a result the content of the sign can be dynamically changed to match the route that is being traveled. Retailers with places of business ahead of or close to the route can push their information to the passengers to keep them aware of their latest bargains and discounts.
By integrating interactive elements such as SMS phone numbers, web links, or 3-D barcodes with the content, advertisers can also utilize the growing spread of smart phones with internet capabilities as a means of interacting with possible customers. The latter can retrieve vouchers and the like directly on their smart phone and the retailer can then immediately judge the success of an advertising campaign.

Attractive price/performance
In addition to being highly dynamic and presenting potential for interaction, DOOH comes with an attractive price/performance ratio. Its range, depending on the number of displays and their distribution, plus the attractiveness of the content, is comparable to popular print media and can even match the impact of TV advertising. The cost to reach 1000 viewers is only about half of what would have to be invested for TV advertising for the same result, while the investment is just a tenth of print advertising. 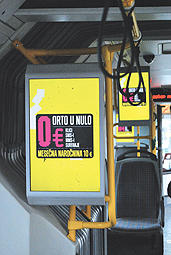 Large-scale digital signage displays are easy to read throughout a bus and make innovative ideas for communication reality, such as interaction with passengers: using the SMS phone numbers that are shown, passengers can even text their comments on particular advertising campaigns, which then appear on the displays and can in turn be commented on by other passengers.

The special appeal of digital signage in buses
It is especially easy to reach a large and widely distributed number of potential customers on buses. Here you have a highly differentiated demographic structure, making it possible to reach those target groups that could otherwise only be addressed through specialized channels. Such channels for specific target groups can be implemented on buses in a number of ways. For one thing, it is possible to present passengers with regional content that also takes the actual bus route into consideration. Then, campaigns can be initiated according to the time of day. For example, in the morning and evening hours, the kind of advertising could be shown that is targeted to the interests of commuters. If the target audience is especially wide spread, the same advertising content can be shown throughout the fleet in all buses at the same time, ensuring that as many passengers as possible get to see a certain advertising campaign.

New digital signage network in Slovenia
Just how well the idea works is demonstrated by innovative applications that are already working successfully in daily transportation, such as that of Ljubljana City Public Transport, the biggest public digital signage network in Slovenia. It comprises 454 displays installed on 128 buses, reaching more than 186,000 daily passengers who travel via bus an average 16 times a month. The digital advertising campaigns can be presented according to a schedule or governed by certain factors, such as the number of passengers on board or a specific bus route. Interaction with passengers also is possible by showing an SMS number that passengers can dial to obtain a link to a mobile portal. Interested customers can then call up further details, subscribe to a newsletter, participate in a prize competition, ask for vouchers, or any other number of interactive promotional activities. Further services are currently being developed. 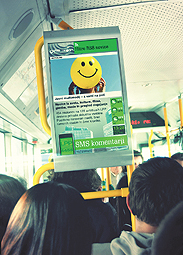 Passengers respond to digital signage. A survey concerning the GEM public multimedia system shows a high degree of passenger satisfaction: users of local public transportation welcomed the new system and rated it extremely positively. 84% of those questioned said that they regularly read the differing content on the digital signage displays, and the majority reckoned the GEM public multimedia system was a positive new feature in the nation’s capital. Research into the satisfaction of passengers traveling on Ljubljana City Public Transport with GEM public multimedia was conducted by the ISIS Institute in January 2010 (survey sample: N = 192 respondents).

Convenient remote management
Updating the content presented on the digital signage displays is managed wirelessly over a remote link. As well as being able to change the information from a central point in a speedy and uncomplicated way, there also are further advantages, which include enhanced availability. This is because the remote link also transports diagnostic information such as the operating status of certain hardware components, thereby enabling preventive system maintenance to be carried out and avoiding downtime.

High demands of the hardware platform
The GEM public multimedia network was developed and implemented by Slovenian digital signage specialist GEM Interactive Slovenija (Prumaro d.o.o.). The system sets up on robust industrial PCs as decentralized components to provide the multimedia content on the individual buses. Besides driving a scalable number of displays, these box PCs also implement the wireless connectivity for updating content and for remote diagnostics of hardware. GEM Interactive set high standards for these core components of the system:

“The ideal hardware was to possess an especially powerful graphics chipset for fluid presentation of large-scale animation. Evaluation of a number of options showed that an AMD

platform best met our requirements for graphics performance. Plus, the entire hardware needed to be robust enough to withstand the unavoidable, continuous buffeting and vibration in everyday local transportation,” comments Tomaz Kerin, chief development officer at Prumaro GEM Interactive. “The hardware was also to integrate a watchdog for remote monitoring and diagnostics. Further basic demands were the E marking of all hardware components for use in local transportation, long-term availability of the entire hardware platform for a sustained design, and a number of requirements where interfacing was concerned.”

Hardware tailored for the job
Interface requirements included a DVI output whose signals were to be distributed by a Cat. 5 extender on low-cost cables with RJ45 connectors to various displays. To power the extender, the box PC was to provide a power supply terminal with a 5 V/12 V output. The wireless connectivity of the system was to be implemented by an HSDPA data card.

Infrastructure of the GEM digital signage network: data is generated on a central server managed over a remote link. Image and video data is transmitted to the individual buses wirelessly and distributed to stationary digital signage stations over cables.

Such a selection of requirements cannot be satisfied by a standard off-the-shelf solution, so GEM Interactive looked around for a specialist in customized box PCs. The answer was found in local distributor Tipteh d.o.o., who not only enabled tailoring of the box PC to the application, but also offers all the benefits of a partner on the spot such as local warehousing of spare parts for fast and cost-efficient availability.
The Kontron KT690/mITX motherboard in an ATX-compatible mini-ITX (mITX) form factor is based on the AMD M690T and SB600 embedded chipsets and the powerful and energy-efficient mobile AMD Sempron™ processors. The range of interfaces on the Kontron KT690/mITX is comparable to that of larger form factors such as ATX. Digital signage 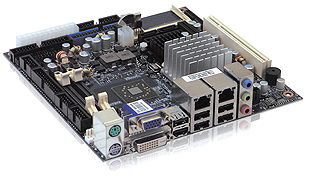 applications benefit not only from the high computing capability per watt, but also from the high graphics performance enabled by integrated Radeon© X1250 onboard graphics. Like other embedded motherboards from Kontron, the Kontron KT690/mITX comes with long-term availability (more than five years). In addition to the hardware, Kontron also offers a variety of application programming interfaces for hardware monitoring that simplify and speed up the implementation of remote-maintenance and diagnostics applications. 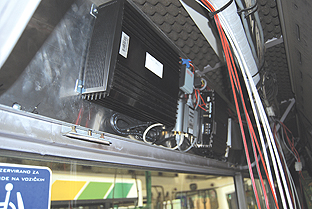 The compact box PC is stowed out of sight behind the maintenance screen and supplies the digital signage displays with image and video data. The integrated HSDPA modem establishes a wireless link for updating content and remote diagnostics of hardware.

Embedded hardware as a quality criterion
The customized box PC is based on a compact KT690/mITX embedded motherboard from Kontron. With its AMD Mobile Sempron processor and embedded chipset, this not only satisfies user requirements concerning performance, graphics, and interfacing, but also is a full-featured embedded component offering at least five-year availability. This was equally important for the customer and the distributor as a long-term assurance of design and supply of spare parts.
The high robustness of the industrial design is a further advantage. With an especially shock- and vibration-resistant processor socket and an operating temperature range from 0 through 60°C, the embedded motherboard demonstrates high reliability in tough environments, making it particularly suitable for all the demands of everyday operation in buses.