NFC (Near Field Communication) is a short-range contactless communication technology created by the combination of RFID and interconnection technologies.
NFC devices operate at 13.56Mhz frequency band with data transfer speed from 106 Kbit/s to 424 Kbit/s. the communication distance between two NFC devices is effective within 10 cm (in active communication mode), which helps to ensure the necessary level of security in transactions and communications. 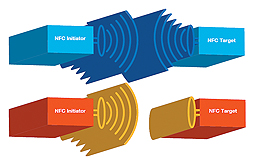 These two modes use a different modulation scheme, coding scheme, transfer speed and frames’ format, as well as initialization process and requirements on data collision control during initialization. These are shown in the table below.

The AFE consists of an antenna and transceiver which is used to detect RF signals, as well as modulate and demodulate signals. A number of communication interfaces such as I2C, SPI and UART are used to communicate with the host controller and can be found on the transceiver. Generally, an NFC controller is a system-on-chip (SoC) that integrates the NFC transceiver and microcontroller, as well as the HCI (Host Controller Interface) and interfaces for connecting secure elements. Apart from ISO/IEC 18092 and ECMA-340 NFC protocols, a NFC controller may integrate other short-range contactless communication protocols in order to provide compatibility in different applications. The secure element is a smart card chip capable of storing multiple application programs. Programs related to mobile payment applications are stored in the chip. A smart card chip usually comprises a card management block, a security domain block (security domain includes the car issuer security domain and provider application security domain), and an application program management block.

According to the standards, NFC technology can be used in three application modes:

• Reader/writer mode
In this mode, NFC devices read information from electronic tags such as newspaper smart reading stands or posters.

• Peer-to-peer mode
In this mode, two NFC devices can exchange data such as synchronizing address books and exchanging images between themselves.

• Card emulation mode
In this mode, the NFC devices (e.g. cell phones) work as a traditional contactless smart card. This enables it to become a contactless paying and ticketing device. This mode is currently its most popular; NFC mobile payment is expected to become one of NFC’s major applications.

The hardware architectures of NFC-enabled products vary depending on different application requirements. The major differences lie in the placement of secure elements. One of them is that SIM cards are separated from secure elements. Another solution is to integrate secure elements in SIM cards. Currently, the former is the mainstream solution in the market; there is no need to integrate secure elements in SIM cards (as shown in Figure 2).
In other words, widespread adoption can be realized as long as semiconductor manufacturers and cell phone companies are willing to support NFC technology, without the need of mobile operators’ cooperation.
However, because the secure elements are not able to communicate with SIM cards directly, the information collected during NFC applications cannot be sent to remote devices such as servers in banks. If remote communication is required, a dedicated interface for the connection between NFC secure elements and baseband processors is necessary, resulting in an extreme complexity of hardware design and updating of the secure element’s application programs. Integrating secure elements and key data in the SIM cards is the solution that mobile operators prefer (as shown in Figure 3).

NFC controllers communicate with SIM cards by using SWP (Single Wire Protocol). SWP is a single-wire protocol with the capability of full-duplex communication achieved based on principle of voltage and load modulation. The application programs stored in secure elements can be downloaded and updated though over-the-air interfaces. As of this writing, NXP and ST have launched products optimized for mobile payment and TI and Renesas have announced that they will join in this market. A sampling of core chips is listed in the table below.

As more and more semiconductor suppliers and cell phone operators make their commitment to implementing NFC technology, the popularization of NFC technology will bring people around the globe unprecedented advantages in many aspects of their lives.