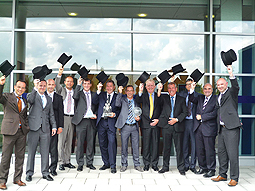 Murata announced it has been awarded a Platinum level Supplier Excellence Award for 2010 from TTI. This achievement, the highest possible award within TTI’s European supplier performance measurement, marks the fifth consecutive year that it has been presented to Murata.
In addition, Murata has the distinction of being awarded the Diamond Award as the supplier who earned the greatest number of special recognition points in 2010. Murata also received the Best Quality Award in recognition of achieving the highest scores across all quality categories. Glyn Dennehy, Senior VP & General Manager, TTI Europe comments, “Achievement of these awards not only represents the dedication of all Murata employees to TTI, but also management’s commitment and overall operating philosophy to strive for excellence. Our most sincere thanks to all employees of Murata for making this achievement possible.”

“On behalf of everyone at Murata, I would like to say a big thank you to the TTI team for another fantastic year of strong business growth.” Comments Gary Atkins, Managing Director – European Distribution, Murata Europe.