Extending battery life
One of the key techniques for extending battery life is to keep the microcontroller in its lowest possible power mode for the longest possible time. Figure 1 shows how high operating speeds and short wake-up times can be combined to reduce average power consumption. The goal, therefore, is for a microcontroller to complete its work in the shortest possible time, so that it can spend more time in a low-power state.

A microcontroller that supports low-voltage operation is also crucial for maximising battery life. Figure 2, reproduced courtesy of Energizer, shows the usable life span of an alkaline and lithium coin-cell battery in a typical data-logger, where most of the time is spent in a low-power state, with an occasional wake-up to process information. The graph shows that, by operating on a lower voltage, the recommended five-year life of alkaline AAAA batteries can be extended by an additional six months. 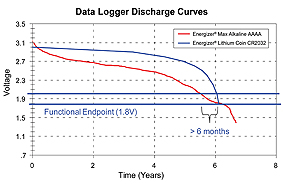 Increasing reliability
The microcontroller’s oscillator impacts on many areas of system performance, cost, manufacturability and reliability. The latest microcontrollers not only operate at higher speeds, but are capable of running at full speed without an external clock source and provide a wide range of internally generated clock frequencies. This allows the software to switch to a lower frequency to remain within the operating specifications as the voltage drops, or to increase speed when a power source is attached.
Achieving a reliable crystal start-up is another common manufacturing challenge. The causes of unreliable startups include variable component quality, flux residue and oversights in the layout. Many of these problems can be avoided by ensuring that the crystal is of high quality and implementing layout and test techniques, such as the negative resistance tests, available from crystal and microcontroller manufacturers.
For low-frequency circuits in particular, configurable crystal biasing can be useful. This allows the bias to be increased to ensure reliable startups across a variety of conditions, or decreased to reduce power consumption. One feature which is essential for improving reliability is the fail-safe clock monitor which continually monitors for system clock transitions. When a few transitions are missed, the fail-safe clock monitor automatically switches the clock source to the internal oscillator and interrupts the CPU.
This allows the microcontroller to maintain critical functions and to perform a controlled shutdown.
Another factor which impacts on reliability is that on-board data EEPROM is often replaced by software emulation using Flash memory, despite the fact that some applications still need independent data storage. New-generation microcontrollers integrate high-endurance data EEPROM, with up to 100K erase/write cycles, whilst still remaining cost effective in portable industrial applications. However, consideration should be given to the minimum voltage range for write operations, which can be higher than the minimum operating voltage of the microcontroller, which limits the effective operating range.

Managing noise
Although low-voltage microcontrollers can be used in applications which require high reliability, using a 5V supply can simplify board layouts, increase noise immunity and improve support for legacy designs. However, as geometries shrink, the availability of new 5V microcontrollers is diminishing. In response to the continued demand for 5V operation, chip manufacturers have developed new ways to operate at higher voltages using smaller, less-expensive geometries.
To further improve noise immunity, different types of input-buffer, used on the port and peripheral pins, support different functions even though they are multiplexed on the same pin. Schmitt trigger inputs offer wider input thresholds than their TTL counterparts and increase the system’s tolerance to noise. 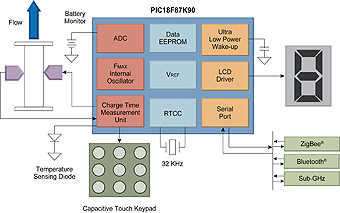 High port drive strength is another important design consideration which goes beyond directly driving LEDs. High port drive strength prevents unwanted coupling near noisy circuits, such as switching regulators and high-speed PWM signals. The potential tradeoff for increased radiated noise can be offset by using a small RC filter on the port pin to maintain the benefits of high drive strength.
A good example of the topics discussed in this article is the flow meter, shown in Figure 3. The microcontroller’s integrated Charge Time Measurement Unit (CTMU) reads the meter’s flow, temperature and capacitive touchpad. Battery voltage is monitored using a 12-bit differential Analog-to-Digital Converter (ADC) and voltage reference, whilst the ultra low-power wake-up module initiates periodic wake-ups. This design demonstrates that using the features offered by the latest microcontrollers can achieve a design which is both robust and low-power as well as capable of achieving high levels of performance.