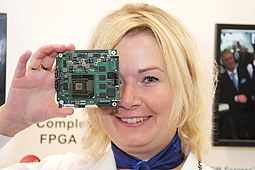 With the Kontron Microspace® MSMST, for the first time a PCIe/104 embedded single-board computer is available which offers a processor of the Intel Atom E600 series with an Altera field-programmable gate array (FPGA) on a single multi-chip module. Such a solution is very attractive for drives & motion providers: they can now use a platform that is available as a series product in a highly integrated fashion and is more quickly adaptable for individual wishes than if a completely customized design had to be developed.

The advantages that result from implementing drive controls with FPGAs are already known to many developers. Servo drives with digital control algorithms for improved intelligence increasingly rely on floating point algorithms rather than fixed point algorithms, which clearly simplifies the programming, although it also requires more computing power and thus a changeover to x86 processors. In the process, the trend for implementation of the interfaces toward dedicated control electronics in proximity to the motor is calling ever more for flexibility, for example with ASICs. But development of ASICs requires a comparatively large investment – so is suitable only for mass providers. In addition, they mostly lag somewhat behind what is feasible with the continuous further development of the technologies: until a new ASIC is on the market, correspondingly large further developments are required so that the initial costs of development pay for themselves. Furthermore, motion control OEMs have the problem of older ASIC components being discontinued. Also, once completely developed, an ASIC can no longer be individually adapted without alteration to the hardware. Then new development is again required. Subsequent customizing of such solutions is thus no longer feasible. 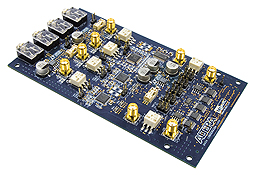 Things are quite different with FPGAs. These components are indeed somewhat more expensive when produced compared to ASICs, but they are reprogrammable and thus re-adaptable, even while in operation. That offers clear advantages when customizing, such as adaptation of the motion control to the motor and field bus connection used and also especially with constant further development of the motion controller. It promotes the sustainability and thus long-term availability of an application. For this reason, many developers are increasingly oriented toward FPGAs and IPC technology and are thus implementing, for example, closed-loop functionality with resolver or encoder interfaces and activation of power electronics and other functions, including fast field bus or industrial Ethernet connections of the drive controllers.
The combination of FPGAs and IPC technology in a highly integrated tandem opens up further options: compact controls with so-called “soft drives” can thus be very efficiently implemented. This means the control circuits can be freely programmable via the IPC, which increases flexibility even further. A lot of intelligence can thus be packed directly into the control. By using a fast field bus, for example, even calculation of the path (trajectory) can be shifted away from the servo regulator to the control and calculated there. However, the precondition for this is fast industrial busses which, for example, are already given with the availability of various industrial Ethernet variants. The various industrial Ethernet variants indeed require specific processing mechanisms that can differ according to target application. But even this challenge is easy to deal with by means of an FPGA-based Ethernet connection. All industrial Ethernet protocols can thus be supported with only one hardware unit and also long-term, because the FPGA configuration required for the respective protocol can also be easily and flexibly adapted to future protocol developments by loading the software along with the suitable protocol stack into the FPGA.
Therefore, the future is: more highly integrated computing intelligence creates a regulating control with noticeably reduced distributed intelligence in the decentralized control which is in proximity to the motor, and independence of the underlying network infrastructure through use of FPGAs. This trend is comparable to that which is taking place in the IT area with cloud computing: after the intelligence was initially decentralized, due to the increasingly fast networks the potential exists for shifting the intelligence to central servers in the cloud. Only the computing power that has to be kept on site remains decentralized. Thus there are also important development steps in the central motion controllers or central control and regulation computers as well as in network performance, which today can amount to 1 GB/s and in the future 10 Gbps bandwidth and also facilitates central computing cycles with very high decentralized sampling rates.
Depending on the concept, the regulation can thus also perform calculations to the point of the trajectory. The boundaries are also blurred, for example, as to whether the fine interpolation, speed and position control circuit are calculated in the regulator or in the control. If FPGA and x86 technology are combined in a system, motion control providers have a solution with which all new state-of-the-art solutions can be developed in a highly integrated fashion. And all this on a footprint that is getting increasingly smaller. There are thus two main application areas for the x86 board with FPGA: either as a motion controller with field bus connection controlled “as needed” by the FPGA or as an all-in-one system with the complete control technology needed for drive control.

Such a solution is now available as a series product, so that OEM solutions can be brought onto the market much more quickly and reliably. Motion OEMs profit additionally by being able to concentrate totally on application development, because they can get the hardware design directly from the embedded computer manufacturer, as a finished series product or as an individually adapted solution. But in the past there were no standard platforms that could be ordered from manufacturers as series products. A tailor-made design was always required and at least the interaction between processor and FPGA had to be individually developed and validated. This effort has been noticeably reduced with the availability of a multi-chip module which combines an Intel Atom processor of the E600 series with an Altera FPGA and is clearly made even easier with the availability of standard form factors such as PCIe/104. The Kontron MSMST PCIe/104 SBC (see box) marks a new milestone of this integration, because it is currently the only available solution worldwide which has already implemented the highly integrated multi-chip module. It offers an HSMC slot for high-speed mezzanine cards (HSMCs) for the customized I/Os. HSMCs physically execute the desired interfaces of the FPGA. Thus, at the customer’s request, Kontron will support a multitude of field bus solutions such as Profinet, EtherCAT, EtherNet/IP and MODBUS TCP.
If, for example, compatible HSMCs are obtained directly from Altera, the suitable IP cores are usually already part of the delivery. Thus the application evaluation can quickly start after only a few steps and installation routines. After successful evaluation, Kontron then also takes over the ready-for-production development and manufacture of the customized platform, as needed. Already validated IP cores, for example, are available for industrial I/Os such as CAN bus, serial interfaces (SPI Master / UART), PCI Express, I2C and GPIO. Other industrial cores are in development or validation. The platform can thus be quickly, easily and increasingly flexibly configured. OEMs need only the required IP core and the corresponding high-speed mezzanine cards (HSMCs) to execute the interfaces. If needed after expanded functionality, Kontron also offers FPGA programming as a service. This flexibility, paired with the new x86/FPGA ecosystem and its IP cores and HSMCs, makes the Kontron PCIe/104 MICROSPACE MSMST a highly attractive SBC for dedicated motion control platforms.

Thanks to the integrated Altera Arria II GX FPGA, the Kontron PCIe/104 MICROSPACE® MSMST embedded single-board computer has a highly adaptable I/O design. OEMs need only the IP core required for FPGA programming and the corresponding high-speed mezzanine cards (HSMCs) which physically execute the desired interfaces. Already validated IP cores, for example, are available for industrial I/Os such as CAN bus, serial interfaces (SPI Master / UART), PCI Express, I2C and GPIO. In addition, the Kontron SBC was developed specifically for use in an expanded industrial temperature range (-40°C to +85°C). 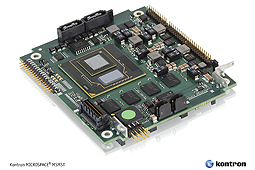 Kontron offers the first PCIe/104 embedded single-board computer (SBC) worldwide which combines a processor of the Intel Atom E6x5 series with an Altera field-programmable gate array (FPGA) on a single multi-chip module and is suitable for use in the industrial temperature range.

This rugged design also expands the range of possible areas where the new Kontron SBC can be used to include areas with adverse ambient conditions.
On the hardware side, the Kontron PCIe/104 MICROSPACE® MSMST is equipped with the Intel Atom E6x5C processor series, with up to 1.3 GHz and 2 GB onboard DRAM. The performance-optimized graphics media accelerator (Intel GMA 600), with up to 128 Mbytes, 18/24 bit LVDS and SDVO interface, is integrated in the processor. Video signals are displayed via optional media boards for VGA or DVI. High-definition audio signals are optionally executed via SPDIF (out) and 2 x analog stereo for line-out and mic-in. Storage media are connected via 2 x SATA300. 2 x USB 2.0 and optionally 1 x gigabit LAN are available at other interfaces. Integration of innumerable customized I/O options takes place via the PCI Express bus of the PCIe/104-compatible module or via the HSMC interface. The trusted platform module (TPM) provides for a high level of safety and reliability due to the hardware-encryption of all transmitted data.

Author:
Andres Kammermann is the Sales Director at Kontron.
www.kontron.com