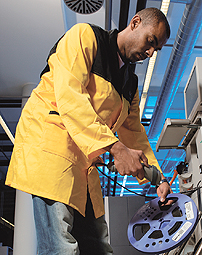 SIPLACE Setup Center improves the stability of the increasingly critical setup procedures in electronics production and minimizes the frequency and duration of setup-related downtime.

With its SIPLACE Setup Center 4.0, ASM Assembly Systems GmbH & Co.KG (formerly Siemens Electronics Assembly Systems) is introducing a new and improved version of its software for setup verification and fill level management. The new version improves the reliability of setup processes online and offline and supports a series of innovative SIPLACE setup variants, such as ‘Random Setup’ or ‘Constant Feeder Tables’. By reminding line operators to scan feeder and component IDs when setting up and refilling feeders, the software minimizes setup-related downtime while providing the foundation for the kind of traceability many industries require today for their products. SIPLACE Setup Center 4.0 also features significant improvement in its integration capabilities with materials management systems. It keeps track of LED brightness classes, triggers automated refills via the well-known SIPLACE OIB interface and even lists alternative components if not enough primary components are available.
With their Version 4.0 of SIPLACE Setup Center, the Munich-based SIPLACE developers respond to the fact that improperly set-up and empty feeders are one of the main reasons for line stops while the operating staff is forced to deal with ever more frequent and faster setup changeovers as a result of declining lot sizes.