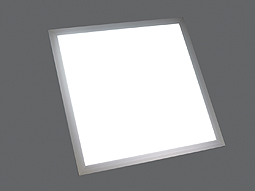 Global Lighting Technologies (GLT) has combined its edge-lit LED light guide technology with extensive Far East mass production capabilities to create a new and improved troffer downlight that is more efficient (60 lm/W), brighter (2500 lumens), offers four different color temperatures, and uses fewer LEDs.
The new troffer downlight assembly is 24”/60cm square and approximately 0.43”/10.9mm thick and weighs 3.5kg. It is edge-lit using only 100 LEDs, which represents a decrease of approximately 70% from previous versions. 50 LEDs are spaced along on each of two sides of the troffer assembly against the ultra-slim (3.5 mm thick) light guide, which uses advanced light extraction features to spread light across the troffer surface with perfect uniformity for bright, uniform illumination in a thinner form factor without hot spots or dark areas. Power consumption is only 40W, and the new troffer offers a high CRI (color rendering index) of ≥ 80.
Customers can select from four different color temperatures ranging from 3000K (warm white) to 6000-6500K (cool, bluish white). According to GLT, illuminating this type of ceiling light with traditional fluorescent tube technology would have resulted in an assembly up to 5 inches thick.