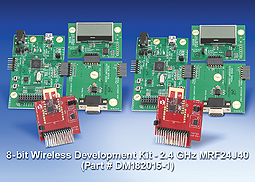 Microchip announces the expansion of its MiWi™ Development Environment (DE) which provides a complete ecosystem for designing star and mesh wireless networking products. The MiWi DE comprises Microchip’s free, proprietary MiWi P2P, MiWi and MiWi PRO star and mesh networking protocol stacks; the 8-bit Wireless Development Kit (WDK) and 2.4 GHz, 868 MHz and 915 MHz ZENA™ Wireless Adapters; as well as the multi-purpose Wireless Development Studio (WDS) with cross-platform support for Linux, Mac OS® and Windows® operating systems. The MiWi DE simplifies the development of ISM-band wireless networking applications for the home and industrial automation, wireless sensor monitoring and control, and smart energy markets.
The new MiWi PRO mesh-networking protocol is ideal for design engineers needing to create medium to large wireless systems. It supports up to 64 hops and 8,000 nodes in an integrated mesh-network topology. The Wireless Development Studio allows the quick, easy development of wireless applications based on the MiWi protocols. It features a MiWi protocol sniffer for monitoring, debugging and gathering information, and a configurator with a graphical user interface that enables customization and configuration of wireless networks.