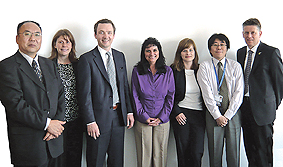 Avnet Abacus – one of Europe’s leading interconnect, passive, electromechanical and power distributors – has received an award from Panasonic in recognition of its success in selling the company’s low ESR Aluminium Electrolytic Capacitors during 2010, during which Avnet Abacus almost doubled its 2009 sales figure. The award was presented by Mr Hiroyuki Hamato, Factory Director of Panasonic Electronic Devices Japan Co., Ltd to Hagen Götze, European Marketing Manager IP&E at Avnet Abacus in a ceremony held on April 11th.
Panasonic’s 2010 Low ESR Products Campaign covering its V-FC, V-FK and V-FP series was targeted at driving increased market share and broadening its customer base, as well as making stock more readily available. The overall results were outstanding. In 2011, Panasonic will be introducing its new V-FT series, radial low ESR components and SP capacitors. Of these, Avnet Abacus are expecting new business growth opportunity for the new market-leading V-FT low ESR products, which are very significantly smaller and lighter than capacitors of similar specification. By increasing capacitance, Panasonic’s V-FT series offers almost twice the capacity of competitive products in the same case size – for example, a capacitance value of 820µF in a G case (Dia10mm × L10mm).