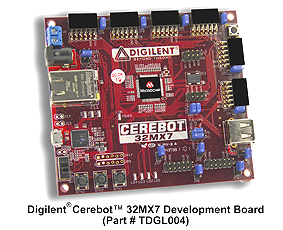 Microchip announces the availability of a PIC32 32-bit microcontroller-based development kit through Digilent, Inc. The Digilent® Cerebot™ 32MX7 Development Kit addresses the growing interest in embedded-control and networking applications from academics and hobbyists, by helping them to learn about microcontrollers and to solve real problems. The kit includes a demonstration board with a 10/100 Ethernet interface, dual CAN and I2C™ interfaces, the ability to use Digilent Pmod™ peripheral modules, and an integrated programming/debugging circuit that is compatible with Microchip’s free MPLAB® IDE. Example applications include university embedded-systems and communications classes, senior capstone projects, and numerous other academic and hobbyist projects.
The Cerebot 32MX7 board features numerous I/O connectors, and power-supply options such as USB power, which give users the flexibility to use the board for a range of embedded networking and control applications. The onboard PIC32 MCU operates at 80 MHz, and features 512 Kbytes of Flash programme memory and 128 Kbytes of RAM, as well as numerous peripherals, such as a full speed USB On-The-Go (OTG)/Host/Device controller, Ethernet controller, dual CAN controllers, timer/counters, serial-interface controllers, an Analogue-to-Digital Converter (ADC), and more. The Cerebot 32MX7 board combines three push buttons, four LEDs, Ethernet, CAN and I2C bus connectors, and six connectors for Digilent Pmod peripheral modules, including H-bridges, ADCs, Digital-to-Analogue Converters (DACs), RF transceivers, speakers and switches, as well as converters for easy connection to RS-232, servo motors and more.
The free versions of Microchip’s MPLAB IDE and C Compiler for PIC32 MCUs can be downloaded now, from http://www.microchip.com/get/BG6A. The Cerebot 32MX7 Development Kit (TDGL004) is available now, priced at $99, from http://www.microchip.com/get/6J50 or from microchipDIRECT.

More information on Microchip’s Academic Programme is available on http://www.microchip.com/get/L4H5

Digilent Inc. is a leader in providing academic and research solutions in high-end electronics, and a premier Microchip design partner.

A video demo of the kit can be viewed on YouTube at: http://www.microchip.com/get/4Q21