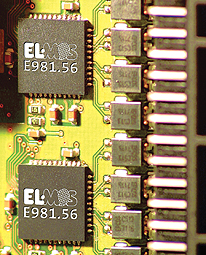 Gleichmann Electronics now offers the new E981.56 FlexRay™ star coupler from ELMOS Semiconductor. The E981.56 is especially designed for efficient implementation of gateways and domain controllers placed in the center of a star-shaped FlexRay™ network. It is the first star coupler worldwide that has been awarded certification according to the current FlexRay™ Electrical Physical Layer (EPL) Specification V3.0. The E981.56 is fully downward compatible with the preceding 1st generation E981.56 device and comes in a 44-pin QFN (Quad Flat No-leads) package with 9 mm edge length and is qualified according to AEC-Q100. It is designed for a temperature range of -40°C to +125°C and a wide supply voltage range of 5.5 V to 18 V. Furthermore, the E981.56 fulfills the requirements of vehicle manufacturers with respect to electromagnetic compatibility (EMC) and electrostatic discharge (ESD). hanks to the four independent physical bus drivers for transmitting and receiving FlexRay™ messages, up to four branches of a FlexRay™ network can be connected with each other with a star coupler. The number of the network’s supported branches can be increased according to a modular principle by connecting several star couplers with each other via the integrated intra-star interface.