The brilliance of solid-state lighting

Over the past few years, there has been much discussion about tackling global warming, lowering carbon footprint and cultivating green energy. One particular solution to address these issues has received considerable attention – solid state lighting. Solid state lighting has gone through tremendous innovation to make LEDs more efficient, long-lasting and affordable. Once primarily used as indicators, LEDs are now seen as a solid alternative for applications such as street lighting, automotive and digital signage. By 2013, the LED global market is expected to be worth $13.7 billion.

Why Solid State Lighting?
Lighting represents 15% of the world’s electrical energy consumption. Compact Florescent Lighting (CFL) is currently referred to as a standard green alternative to incandescent lighting systems. However, in most aspects, High Brightness (HB) LEDs outsmart CFLs as the next-generation green technology alternative offering large savings in energy. Comparatively, HB-LEDs have [1] longer life (as long as 50,000 hours) [2] low maintenance costs [3] about twice the efficiency and [4] produces less heat. HB-LEDs use around 15% of the energy of an incandescent bulb, while generating more light per watt (measured in lumens/watt).

High Brightness LED Arrays for Signage and Multi Colour Displays
High brightness LEDs are becoming more and more popular in applications such as display panels and traffic signals. For these applications, new multi-channel HB-LED drivers with constant current outputs are available. The constant LED current guarantees the same brightness for all LEDs, and provides a cost advantage, as it eliminates the need for external resistors. When integrated with novel sensing technologies, the system can be designed to automatically detect and report thermal meltdowns and device faults. Moreover, optical sensors can be used to capture information about ambient lighting conditions, which can then be fed into the control unit in order to adjust brightness and contrast through dimming. A block diagram of a typical display solution is shown in Figure 2. 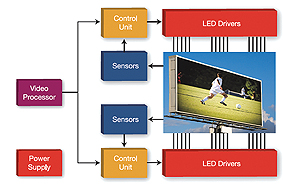 A video processor streams the video signals (i.e. pixel information) on to the control unit. The control unit usually employs a microcontroller (MCU) solution which decodes and maps this stream into an (x,y) matrix. Each pixel on the (x,y) matrix is represented by a string of Red, Green and Blue LEDs on the display board, which are driven by individual LED drivers. The correct level of brightness required for each LED string is stored in the MCU’s memory. A Pulse Width Modulated (PWM) signal is fed into the LED drivers to vary the brightness of each string to produce the correct pixel color. This process is known as PWM dimming, which is far superior to the analog dimming technique used in older LED drivers. Analog dimming adjusts the brightness of LEDs by adjusting the forward current. However, changes in the forward current cause a proportional shift in the LED color, making them unusable in multi-color, high quality panels. PWM dimming provides adjustable brightness by modulating the LED’s forward current between 0% and 100%.
Depending on the complexity, multiple LEDs could be driven by a single dedicated MCU pin, using a serial to parallel interface or individual pins could be dedicated for each LED string. The latter configuration is used for small and simple display panels (owing to its simplicity), while the former is suitable for large and complex signage and display solutions.
Apart from supporting PWM dimming, LED drivers need to accommodate additional features for this application: [a] Dot correction for equalizing luminance of LEDs [b] 8, 12, 16-channels with 30 – 120 mA driver current per channel [c] Data transfer up to 30 MHz and [d] Safety protection and error reporting.
The control unit, sensors and the LED drivers operate in a closed loop configuration. Sensors feed information on ambient lighting conditions (as well as device fault, thermal meltdown and color shift) to the control unit, which then adjusts color, brightness and contrast through controlling the dimming of the LEDs.
HB-LEDs require heat sinks to dissipate heat off the LED source in order to maintain an optimum operating temperature. As a general rule of thumb, for a well-ventilated aluminium heat sink, there should be 10 square inches of heat sink surface area for every 1W of energy dissipated. Also, the heat sink fins should be oriented in a manner allowing hot air to flow upward and away from the heat sink and allowing cold air to flow onto the surfaces of the heat sink.

LEDs in Street Lighting
Street lighting is an important public service and a necessity. However, traditional street lighting uses high-pressure sodium/mercury vapor lamps, which consume a lot of energy while demonstrating poor energy efficiency due to heat loss. With their longevity and energy efficiency, LEDs are being adopted en masse in street lighting. In the long run, municipalities will save a fortune, while maintenance costs can be kept at a minimum.
Solar Powered HB-LED Lighting systems combine a clean energy source with the advantage of the solid state lighting, leading to an even greater and energy efficient form of lighting. Designing such systems require understanding the major components of a solar powered HB-LED Lighting system, as well as the design challenges in implementation.

EFFICIENT POWER CONVERSION is an important factor in typical HB-LED lighting applications— and especially in solar-powered applications. Designers of systems for these applications must not only maximize power from the solar panel but also condition it for maximum energy storage in the battery array and convert it for use in powering the HB-LEDs (Figure 3).
Photovoltaic systems (solar cells) are by far the most universally adopted transducers to convert the sunlight, in particular energy carried by photons, into electrical energy. However, energy production by photovoltaic systems must take into account the intrinsic periodicity of the solar source (e.g. during the night the energy source is absent).
Electrical storage into batteries assures a continuous availability of energy.
Once the electrical energy has been produced and stored, the next step is generating light in a wise way, in terms of energy saving and environmental respect.

The solar LED lighting solution (Figure 4) approaches all the above requirements in one single system, from the MPPT algorithm to the battery charger related profile, the LED driving, and every kind of system protection towards the panel, the battery and even the lamp, making the entire architecture safe.
Owing to their high luminous efficiency, and being free of hazardous materials (mercury or toxic gases), LEDs are seen to be one of the cleanest light sources in ecological terms. In addition, their low driving voltages make LEDs particularly suitable for photovoltaic systems. In order to improve the overall efficiency and maintain light output, it is critical to drive the LEDs with a constant and controlled current source. Thus, any LED driving solution must take in to consideration these parameters. 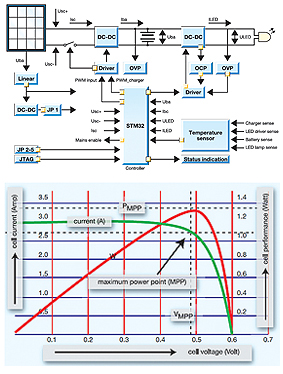 – Input voltage range:
• 6V batteries for applications like solar lanterns;
• 12V batteries for home lighting applications;
• 24V batteries mainly dedicated to streetlight solutions.
– Number of LEDs and how they are connected:
• Series in a single string;
• Multiple parallel strings.
– LED current – high brightness LEDs are supplied by currents of from several mAmps to 1Amp achieved in LED technology.
The availability of LEDs up to and above 5W, combined with their high luminous efficiency, contributes to their diffusion in the lighting market as replacements of traditional, and often less efficient, light sources. Depending on the battery voltage and the number of LEDs connected in series in one string, a buck or a boost conversion can be the most suitable solution.
HB-LED lighting can be used in either networked or standalone lighting. Networked lighting enables energy-saving control and dimming, communication of environmental activity (such as movement and traffic), and monitoring of battery and fault status.
Both wired and wireless networks are common, and these networks commonly use standards-based wireless protocols, such as ZigBee, and proprietary wireless protocols operating over the ISM bands of 902 to 928MHz and 2.4GHz.
For wired networking, power-line modems can communicate over the grid. Although it may seem contradictory to have a grid-connected solar-powered HB-LED luminary, the grid would primarily perform networked communication and provide an optional power source for battery charging. A potential application using both wired and wireless communication would be a wireless link connecting a subnet of lights. A node that connects to the main controller through a power-line modem would control these subnets.
Another aspect of the system is energy storage. The ability to charge SLA (sealed lead-acid) batteries at below-freezing temperatures makes them not only most common in off-grid solar-powered HB-LED lighting, but very desirable in solar-powered applications.
In choosing the capacity of a battery, especially SLA batteries, it is important to include a design factor to account for the impact of ambient temperature, because SLA-battery capacity decreases in cold environments.
The following equation calculates battery capacity:
CBATTERY = (IL x TSOLAR x 24 x FTEMPERATURE)/FDOD
Where CBATTERY is the battery capacity, IL is the current load, TSOLAR is the number of solar-autonomy days, FTEMPERATURE is the temperature-design factor, and FDOD is the maximum battery-depth-of-discharge percentage. This equation is a good estimate for SLA batteries when the rated discharge rate is similar to the expected discharge rate. If the discharge rate is higher or lower than the specified discharge rate of the battery, you must adjust this estimate accordingly.
Solar panels have a characteristic I-V curve, which varies depending upon irradiance and temperature. The panel generates maximum power at a point on the I-V curve (Figure 5). In many solar applications, the system operates the panel at this point, generating maximum power. Many algorithms exist for this phenomenon, MPPT (maximum-power-point tracking), but the goal of all of them is the same: to operate the panel as close as possible to the characteristic peak-power point of the power curve. Implementations of MPPT can be fully analog or mixed signal and often include a microcontroller or a state machine. In designing a system, you should perform a cost-benefit analysis to determine whether adding an MPPT function will increase energy capture enough to offset the cost of implementation.
The challenge of providing light in rural areas can be achieved by producing energy locally. Photovoltaic systems make it possible to exploit a readily available energy source, while at the same time respecting the environment. STMicroelectronics’ technologies enable a ready-to-go discrete implementation of all the above features, as well as an integration path towards a one or two chip implementation, achieving miniaturization and the best efficiency targets.