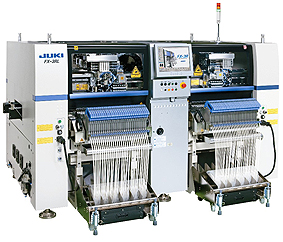 Juki will release the FX-3R High-speed Modular Mounter. The newest model in the series, the FX-3R has significantly higher production capacity than its predecessor – the FX-3. Through design improvements to both hardware and software, the FX-3R realizes a production capacity of 90,000 CPH (0.040 second/chip under optimal conditions).
The FX-3R is equipped with new linear servomotors in the X and Y axes to drive the heads. Additionally, by reducing the weight of the head and updating the head design with a more rigid structure, placement speed is made faster. Improvements also have been made in the optimization software to increase the efficiency of actual placement operation. Through these improvements, the FX-3R realizes a production capacity of 90,000 CPH (0.040 second/chip under optimal conditions), 21 percent faster than the FX-3. Supporting large boards up to 610 x 560 mm (XL board specification) as a standard feature, the FX-3R offers an optional feature to produce a long board up to 800 mm wide, mainly used for LED lighting.
FX-3R inherits the “hybrid tape feeder feature”, which was first incorporated into the previous model FX-3. This feature allows FX-3R to accept both electric and mechanical tape feeders in one machine. With a combination of the KE-3020 high-speed flex mounter, FX-3R creates a high-speed, high-quality production line capable of meeting a variety of manufacturing needs.
High-speed machines have been mainly required in the surface mount market. Juki has worked to directly consider market requirements and understand customer needs. The FX-3R, the newest evolution in the FX series, offers increased speed to fulfill the major customer requirement.
Juki will expand its market share in the high-speed market by developing products that meet the growing requirements of faster throughput and the ability to produce high-volume/high-mix products.