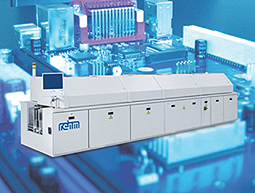 Rehm Thermal Systems is preparing to showcase its advanced thermal technologies at this year’s Apex exhibition, being held in Las Vegas from 12th – 14th April. As the only single source for convection and condensation soldering systems, Rehm will be demonstrating its unique capabilities from Booth 635. The Rehm team will be demonstrating its advanced, vacuum-capable Condenso condensation soldering system at the show. Apex visitors will be able to discover how condensation soldering, also known as vapour phase soldering, delivers ten times the heating efficiency of convection soldering, and produces a much more uniform temperature distribution during the reflow process. Ideal for thermally challenging PCB assemblies requiring a lead-free solder process, Condenso also eliminates the potential for thermal damage to components or PCBs. A vacuum option can be combined with the reflow process to produce virtually void-free solder joints, Condenso enables consistently high quality soldering, regardless of PCB complexity.
Also on show on booth 635 will be Rehm’s VisionXS convection reflow residue management system, featuring its pioneering Pyrolysis technology. Pyrolysis is the thermally induced decomposition of organic compounds, enabling complex molecules to be broken down into simpler substances with the use of elevated temperatures in a largely oxygen-free environment.