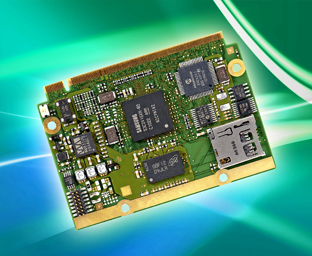 MSC presents an innovative ARM-based module concept – that is especially suitable for cost-sensitive embedded applications – in Hall 9, Booth 463 at embedded word 2011.
Due to their pin compatibility and the usability of various CPUs – the current range is from ARM9 derivatives clocked at 400 MHz up to 1 GHz Cortex-A8 cores – the new nanoRISC® modules offer a high degree of scalability. Furthermore, the modules, which measure only 50 mm x 70 mm, feature a low power consumption of typically < 3 W. Interfaces such as Ethernet, USB, CAN, UART, I2C, SPI, GPIO, Camera, Audio, ADC, Touch and Display are directly available to developers via a 230-pin MXM connector. Depending on the CPU used and use of the integrated 2D/3D graphics engine and corresponding codex, the graphics performance achieves video resolutions of up to 1080p. The first member of the new product family is a nanoRISC® module, based on the Samsung Cortex-A8 S5PC100 processor, with up to 667/833 MHz clock frequency, maximum 512 MB DDR2 SDRAM, up to 4 GB NAND flash memory (NAND, eMMC and SD/MMC), audio and touch support, real time clock, system monitoring, watchdog and many other features. The 2D/3D graphics engine integrated on the S5PC100 supports video resolutions up to 720p. The evaluation board, which is made available from MSC together with the nanoRISC® module, enables developers to easily access all input and output pins of the module via standard connectors. In combination with different modules, the baseboard can also be used as a starter kit for the development of own hardware on the basis of the respective Samsung processor, which is also available from MSC. Linux and WINCE are offered as board support packages. 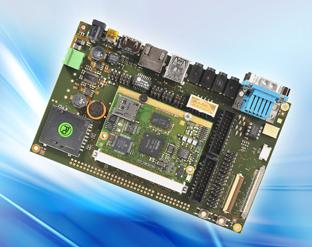 Thanks to the use of NAND flash memories, DDR2-SDRAMs and the wide range of interfaces integrated on the module that additionally minimize the cost of the baseboard, the nanoRISC® modules are also suitable for cost-sensitive projects with large volumes.
In the lower performance range, the nanoRISC modules are primarily used in applications where a change from microcontroller to microprocessor is necessary due to increased demands in the area of visualization and operation as well as of communication with Ethernet or USB. In the higher performance range, the nanoRISC® modules with Cortex-A8 CPU and clock frequencies up to 1 GHz particularly attract a great deal of interest when looking for more compact, lower power and, ultimately, more cost-effective solutions compared to established technologies.

Detailed information regarding the nanoRISC® modules can be requested by contacting nanorisc@msc-ge.com.