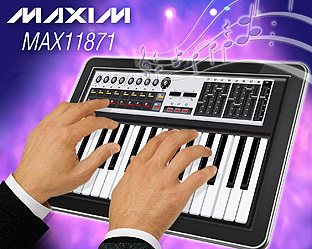 Bart DeCanne, business director for application-specific data converters at Maxim, remarked: “We recently started sampling the MAX11871, and customer feedback has been unanimous: this part presents a sea change in capacitive touch performance. Finally, touch through gloves, with long fingernails, and with a stylus is possible. These capabilities will enable a range of new user-interface experiences on handsets, tablets, and other end equipment, providing a superior level of differentiation to Maxim’s customers.”

Industry’s highest sensitivity opens up new applications
The MAX11871 is a mutual capacitance touch-screen controller capable of detecting and tracking up to 10-finger simultaneous touch. All processing is included on-chip to output up to 10 X,Y touch location coordinates, with a Z pressure metric associated to each touch point, via a standard I2C interface to a host microcontroller. The part’s analog front-end is built from the ground up for capacitive touch by the Company’s high-resolution data-converter IC design team, and provides near 60dB signal-to-noise ratio (SNR) performance, equivalent to a 1000:1 ratio between touch and no-touch. This is an order of magnitude (10x!) higher than other solutions on the market today.
The excellent SNR enables detection of very weak (in the femto-farad range) touch variations, such as from a hand waving near the screen (proximity detection), touch from a fine-tip stylus or ballpoint pen, or a hand covered by a glove. Also, it means that the touch point can be farther away from the sensor, enabling touch screens with thicker cover glass or plastic for improved ruggedness.
The MAX11871 also includes a proprietary architecture to reject noise (by over 40dB) from external sources such as AC USB chargers, LCDs, or CFL lights with no additional external components. This selectivity enables the part to be used in high LCD noise environments such as next-generation on-cell and in-cell touch screens.
For applications only requiring 4-point touch detection, the MAX11855/MAX11856 implement a 4-finger simultaneous mutual capacitive multitouch solution, which eliminates any ghosting effect.

The TacTouch advantage: easily add haptic feedback to any end application
As part of Maxim’s TacTouch product line of haptics and touch-screen controllers, the MAX11871 and MAX11855/MAX11856 can directly interface to the previously introduced MAX11835/MAX11836 haptic controllers/drivers for piezo actuators and electro-active polymers. In comparison to classic low-voltage motors, these high-voltage actuators provide a superior touch feeling (i.e., they mimic the feeling of a button click on a touch screen). The two-chip touch and haptic controller chipset provides complete support for touch applications that “touch you back,” including support for region- and pressure-dependent haptics.

All parts are sampling now for qualified opportunities. Evaluation kits are available. Mass production is scheduled to begin before the end of Q1 CY2011.