MEMS (microelectromechanical system) technology has been on the job for about two decades – think airbag deployment and automotive pressure sensors. But it took the motion-sensing user interfaces of game controllers and smart phones to generate broad awareness of what the technology is capable of.

Advanced, commercially available MEMS accelerometers and gyroscopes are poised to transform a diverse range of end products through the five types of motion sensing they enable: acceleration, vibration, shock, tilt, and rotation. This article offers a sampling of what’s possible.
Acceleration, vibration, shock and tilt are actually different manifestations of acceleration over different periods of time (Figure 2). Rotation, the fifth mode of motion sensing, is another matter. Human beings don’t intuitively think of these motion senses as variations on acceleration/deceleration. In order to see the range of possibilities, it’s good to consider each mode separately.
Acceleration (including translational movement such as position and orientation) measures the change in velocity in a unit of time. Velocity, expressed in meters per second (m/s), includes the rate of displacement and direction of movement. Acceleration, therefore, is measured in meters per second squared (m/s2). Acceleration with a negative value is known as deceleration.
If we consider acceleration over various periods of time then vibration can be thought of as acceleration and deceleration that happens quickly and in a periodic manner. Likewise, shock is acceleration that occurs instantaneously, but unlike vibration, usually happens just once. When an object is moved to alter its tilt, or inclination, there’s a change in position with respect to gravity. This movement happens slowly compared to vibration and shock.
Because these first four modes of motion sensing involve aspects of acceleration, they are measured by g force, the unit of force that gravity exerts on an object on the Earth (1g = 9.8m/s2). A MEMS accelerometer detects tilt by measuring the effect of the force of gravity on the different axes of the accelerometer. In the instance of a 3-axis accelerometer, three separate outputs measure acceleration along the X, Y, and Z axes of motion.
Accelerometers with the largest market share today employ differential capacitors to measure g force, which is then converted into volts or bits (in the case of a digital-output accelerometer) and then passed to a microprocessor to perform an action. Recent technology advances have led to the manufacture of tiny MEMS accelerometers in low-g and high-g sensing ranges with much wider bandwidth than previously, which has grown the field of potential applications. A low-g sensing range is <20g and deals with motion a human can generate. High-g is useful for sensing motion related to machines or vehicles; in essence, motion that humans cannot create. 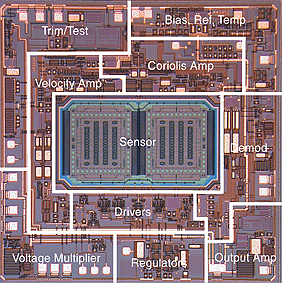 Acceleration, vibration, shock and tilt are all types of linear motion. But what about rotation? Rotation, or turning on an axis, is a measure of angular rate motion. This mode differs from the other four because rotation can take place whether acceleration changes or not. To understand how that works, picture a 3-axis inertial sensor with the sensor’s X and Y axes parallel to the Earth’s surface and the Z axis pointing toward the center of the Earth. In this position, the Z axis measures 1g; the X and Y axes register 0g. Now rotate the sensor to move only about the Z axis. The X and Y planes simply rotate, continuing to measure 0g, while the Z axis still measures 1g. MEMS gyroscopes are used to sense this rotational motion. Because certain end products must measure rotation as well as other forms of motion, gyroscopes may be integrated in an inertial measurement unit (IMU) that embeds a multi-axis gyroscope and multi-axis accelerometer.

Acceleration and Power Management
Since acceleration comes into play for detecting movement and position, it’s possible to use a MEMS accelerometer to know when a device is picked up and put down. When the motion is detected, the accelerometer generates an interrupt to turn device functions on and off automatically. Various function combinations can remain active or be put into the lowest power state. Because they eliminate repetitive actions on the user’s part, movement-driven on/off features are particularly people-friendly. What’s more, batteries can last longer before they need to be recharged or replaced; that’s power management made possible by movement-driven features. Imagine an intelligent remote control with a backlit LCD.

Vibration and Energy Saving
Slight changes in vibration are a leading indicator of misaligned mechanical components, worn bearings and other machinery problems. Very small MEMS accelerometers with very wide bandwidth can be used to monitor the vibration in motors, fans, and compressors.
Performing predictive maintenance saves wear and tear on expensive equipment and prevents costly breakdowns. Is your machinery operating efficiently? Measuring changes in the equipment’s vibration signature can tell you.

Tilt Sensing for Precision Operation
Tilt sensing, too, has potential for use in gesture-recognition interfaces. In the fields of construction and industrial inspection equipment, one-handed operation may be preferable. The hand not operating the device remains free to control the bucket or platform where the operator stands, or perhaps to hold a tether for safety’s sake. The operator could simply rotate the probe or device to adjust its settings.
A 3-axis accelerometer senses the “rotation” as tilt in this case by measuring low-speed changes in inclination in the presence of gravity, detecting the change in the gravity vector and determining whether the direction is clockwise or counterclockwise. Tilt detection combined with shock recognition would let the operator control more functions with just one hand. 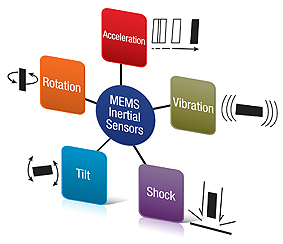 Tilt measurement also comes into play when you need to compensate for the position of a device. Take the electronic compass in a global positioning system (GPS) or mobile handset. It’s well known that a heading error results when the compass is not positioned exactly parallel to the surface of the Earth. In industrial weigh scales, the tilt of a loaded bucket relative to the Earth must be calculated to read the weight accurately. Pressure sensors, such as those used in automobiles and industrial machinery, are likewise subject to gravity’s effects because these sensors contain diaphragms whose deflection changes depending upon the position in which the sensor is mounted. In all these situations, MEMS accelerometers perform the necessary tilt sensing to compensate for the error.

Rotation: Gyroscopes and IMUs in Action
Real-world applications of MEMS technology are enhanced when rotation is combined with other types of inertial sensing. This requires the use of an accelerometer and a gyroscope.
Some IMUs include a multiaxis accelerometer, a multiaxis gyroscope and, to further increase heading accuracy, a multiaxis magnetometer. The IMU may also provide full 6 degrees of freedom (6DoF) measurement, bringing ultrafine resolution to applications such as medical imaging equipment, surgical instrumentation, advanced prosthetics, and automated guidance for industrial vehicles.

The sensor’s manufacturer can pretest and pre-calibrate multiple functions, providing another advantage to selecting an IMU.
IMUs are also proving useful in less obvious areas. For example, they can be incorporated into an intelligent golf club that tracks and records every movement of a swing so that the golfer’s technique can be refined. Accelerometers inside the club measure the acceleration and swing plane, while gyros measure pronation, or the twist of the golfer’s hands, during the swing.
The golf club records the data collected during play or practice for later analysis on a PC.

The Next Wave
In short, MEMS-based inertial sensing offers an abundance of options to explore across all five motion senses. There’s something for everyone, whether the need is for user-friendly features, minimizing power consumption, eliminating physical buttons and controls, compensating for gravity and position, or more intelligent operation.
As an innovator, Analog Devices, with its iMEMS Motion Signal Processing portfolio, leads in creating the accelerometers and gyroscopes needed to deliver for this next wave of signal processing. A growing range of motion-sensing applications will benefit from the small size, high resolution, low power consumption, high reliability, signal conditioning circuitry and integrated functionality that these IC solutions provide.