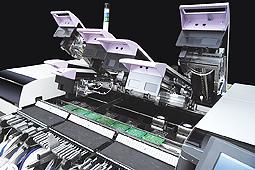 Machine configuration remains unchanged – business as usual
Assembléon’s True Capacity on Demand is possible thanks to the uniquely modular design of its flagship A-Series Pick & Place machines. Assembléon’s modular, calibration-free robots enable the fastest adaptation to existing machines on the line, with production levels being increased in easy and small incremental steps. The machine configuration remains the same, and there is no need for drastic machine modifications.
The floor space remains the same, and the production line itself is undisturbed. Although other Pick & Place manufacturers have tried to copy the initiative, their reliance on complex gantry-based systems greatly reduces the benefits. They can only increase capacity by adding machines to a line or by changing vulnerable internal hardware.
Assembléon’s A-Series Pick & Place machines already offer the industry’s lowest real costs of placement, largely because of their benchmark single-digit defects per million placements. The company’s unique parallel placement technique optimizes every placed component to give the industry’s highest First Pass Yields. Up to 20 individual robots each place 6,000 components an hour, giving IPC 9850 outputs up to 121 kcph. Recent winner of Circuits Assembly magazine’s 2009 Pick & Place Service Award, Assembléon helps ensure that production lines maintain their quality levels and minimize the overall cost of placement across the equipment’s complete lifetime.
www.assembleon.com