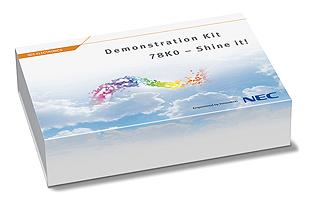 The Shine it! tool kit – now available from Gleichmann Electronics – not only helps to more easily and quickly implement lighting applications with multiple LEDs, but also controls of stepping motors, solenoids or switched-mode power supplies.
The core of the Shine It! kit is a small demonstration board that, in addition to an µPD78F8024 8 bit microcontroller from NEC Electronics, also contains several other components including MOSFETs, which can switch currents in the range of 300 mA to 1.5 A.
The MCU itself particularly features an integrated four-channel constant current driver for constant High-Current Driver (HCD), which can be configured either in four independent channels or as combined channel. The constant current drivers can be operated in buck or boost mode. The options, which offer the developer for example the selection of the optimum LED control, are correspondingly versatile. In addition to the integrated temperature or ambient light sensors, a DMX512 interface, a RS232 link or optionally also a wireless ZigBee™ access are available to users of the Shine It! kit. Furthermore, with help of the flexible Applilet EZ tool, developers can also create user-defined dimmer controls by manually drawing the duty cycle for each channel.
www.msc-ge.com