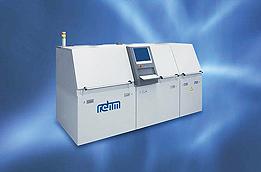 Rehm Thermal Systems presented its latest developments in Vacuum Vapor Phase reflow with the Japanese launch of their VPS Condenso Vacuum system at Internepcon in Tokyo.
Exhibiting with its new Japanese distribution partner Techno Alpha in the west hall, Rehm demonstrated the many advantages of the new technology, which is particularly effective for thermally demanding applications. Marc Dalderup, Chief Commercial Officer for Rehm Thermal Systems explains: “Void-free soldering with lead-free solders is an important prerequisite for the production of power electronics.
However, minimal void rates are only possible with soldering processes that subject the molten solder to a vacuum, enabling the escape of remaining residues and gas inclusions which would otherwise result in voids in the solidified joint. In many cases this delivers solder joints with surface contact ratios of greater than 99%.”
Condensation Reflow provides exceptionally effective thermal transfer due to the even release of heat during condensation and the perfectly constant temperature of the medium. In addition, the medium’s boiling point limits the maximum soldering temperature so that the PCBs cannot be damaged by overheating. This, as well as the ability to control the volume of injected liquid and intermediate exhaust of the vapor, makes it possible to precisely adjust the temperature/reflow profile, delivering highly reproducible soldering results and minimized scrap rates.
www.rehm-group.com