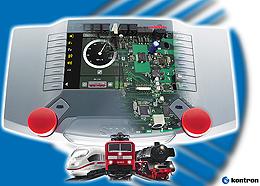 At the SPS/IPC/Drives Kontron presented the hardware platform for the new Central Station 60213 from Märklin Digital. With its manifold tailor-made interfaces, the new platform underlines Kontron’s competence in embedded computer technology.
The platform, which Märklin introduced in September 2008, offers more application flexibility than any other known control system for model railways. It communicates via Märklin’s own interfaces as well as numerous standard interfaces such as, for example, USB and Ethernet and repesents a new milestone in the control of complex model railways. Enthusiasts with smaller setups will also get the most out of this new control platform. The Märklin Central Station 60213 is operated via a touch screen and keys and is based on processor technology that is used in other devices such as PDAs and integrated on Computer-on-Modules offered by Kontron. The completely tailor-made design impresses with its high degree of integration and customized interfaces for connecting all of the control units that Märklin has developed since the introduction of digital technology 24 years ago.
The system supports Märklin’s own busses, S88 and 6017, and has four interfaces for Märklin’s own CAN-based bus as well as USB and Ethernet interfaces. The 4c graphic interface ensures easy and intuitive operation and the Central Station 60213 offers a vast range of control options that have not been possible until now on Märklin digital railways.
www.kontron.com