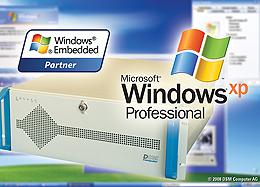 Until June 30, 2008 the end of Windows® XP Professional by Microsoft® Corporation was an accomplished fact. With this decision, the official sale of Windows® XP Professional for the complete consumer market was stopped.
The software, however, is currently still available in the market. The so-called System Builder licenses for Windows® XP Professional can still be purchased until January 31, 2009 from distributors.
“Windows® XP Professional for Embedded Systems” is the industrial version of the classic XP Pro Desktop operating system and will be available for dedicated systems for industrial use until at least 2016; the new designation: Windows® Embedded Enterprise. Certain manufacturers, including DSM Computer AG in Munich, are still permitted to equip their industrial system line with the software. This is permitted by a contract from 2005 made with Microsoft® Corporation. Consequently, DSM AG, as Embedded OEM partner of Microsoft®, is permitted to supply Windows® XP Professional software beyond 2010 until at least 2016. The delivery is made only in conjunction with the DSM Computer AG industrial controllers. Furthermore, DSM is authorized to create its own recovery disks for their industrial systems.
The extremely long availability by DSM Computer AG is possible because of the Microsoft® Embedded OEM status and may be a little surprising given the availability of Windows® Vista™, however, in particular in industry, the ensured long-term availability is in demand not only for the hardware but also for the software.
www.DSM.AG