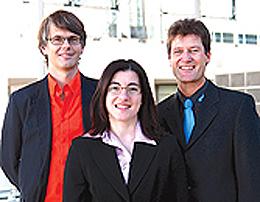 The Qseven™ consortium presented at electronica 2008 the Qseven™ Design Guide, the Board Support Package for the Embedded Application Software Interface (EASI) and the Qseven™ Reference Platform designed by MSC. The Qseven™ consortium, which by now has been joined by 18 leading embedded computing companies, actively supports the compact small form factor 70 mm x 70 mm for highly integrated computer-on-module.
The Design Guide is available to all interested parties. It contains detailed circuit diagrams and interface descriptions placing system designers in a position to immediately begin with the design of Qseven™ motherboards. The complete module specification, which provides all information for manufacturers to design modules to be mounted on these motherboards, has already been available since July. With the Qseven™ Reference Platform, customers as well as manufacturers can verify their module interoperability and perform compliance tests. The Embedded Application Software Interface (EASI) defined in the Qseven™ standard covers functions like watchdog timer, I²C bus, LCD backlight control, BIOS user storage area and temperature control.
Reference Platform, Design Guide and a well defined software application interface are important elements of a standard designed for complete openness and easy interchangeability of computer-on-modules from different vendors. To the user it guarantees the availability of a second source and helps to protect the investments into hardware and software development.
The scalable Qseven™ platform was specifically developed for power saving processor technologies of the new MID generation. First implementations use Intel® Atom™ and VIA Nano processors. Because the Qseven™ standard limits the system power dissipation to a maximum of 12 W, the scalable modules are ideally suited for mobile, battery-operated and fanless systems. The powerful boards require only one simple 5 V power supply thus making additional power circuits on the Qseven™ module unnecessary.
www.qseven-standard.org